Offering the very best in fresh catering since 1994 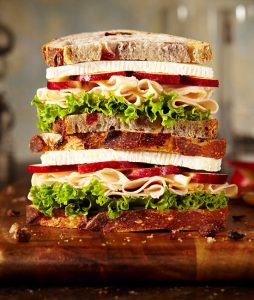 (June 1, 2012 – DENVER, Colo.) – Yesterday’s announcement of the purchase of Udi’s Healthy Foods LLC, founded in 2006 as a gluten-free natural product company, by Smart Balance Inc. is exciting news for Udi Bar-on and his family. As part of the family’s commitment to its thousands of local customers, the Bar-ons affirm they will continue their local restaurant, bakery and catering businesses in Colorado.

Udi’s Foods, a family-owned enterprise founded by Udi and Fern Baron in 1994 in Denver, Colo., is now a thriving portfolio of six restaurants, an artisan bakery, and a catering company. What began as a singular sandwich shop in Denver is now a vigorous food business serving hungry Coloradoans at farmers markets, in their own Mediterranean and artisan bakery-inspired cafes, and on regional grocery store shelves through its artisan bread line.

The Udi’s gluten-free products were developed from the same talent pool of Udi’s Foods but managed as a separate business entirely under the name Udi’s Healthy Foods LLC. Thus, the selling of the gluten-free business in no way affects the ongoing operations for the restaurants, bakery or catering company.
Local food enthusiasts should rest assured that today’s Udi’s Foods owners — Udi, Fern, Etai and Robin Bar-on–remain focused on serving their diners and customers through their local restaurant, bakery and catering businesses. “We really love our local businesses. It gives us endless pleasure to feed our neighbors daily,” said Etai Bar-on, Co-CEO for the family-owned company.

From rustic bread baked daily in their Louisville bakery to wood oven pizza in their Arvada restaurant, to serving thousands of corporate lunches, to daily made hummus based on their grandfather’s recipe, the next generation of Udi’s food businesses will evolve and happily reside in Colorado.

The Bar-on family appreciates the long time support of its many customers and diners and they look forward to carrying their family’s food traditions and deep ties to Colorado into the future.

Where We’ve Been Featured

Offering the very best in fresh catering since 1994